The Masai Mara National Reserve is one of the most popular and most visited African game reserves. Situated in the south-western part of Kenya in the Great Rift Valley, the reserve covers just over 1,500 km².

A true ‘Out of Africa’ safari destination, the reserve is mostly made up of open plains baked golden by the African sun. And although the actual size of the reserve means that it is certainly not one of the largest in Africa, the sheer density of game and birdlife makes this an exciting and rewarding safari destination for first-time safari goers or for returning safari enthusiasts. 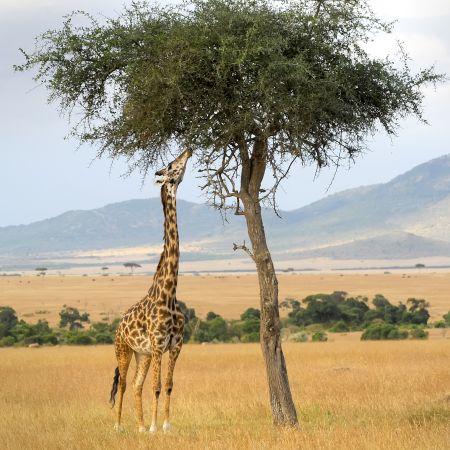 Big cats, elephants, giraffe, wild dog, buffalo, rhino, hyena, wildebeest, gazelles and impala are just a few of the many animal species that can be spotted on daily game drives (no night drives are allowed in the actual reserve itself) and hundreds of bird species have also been recorded.

If you are staying here during the months of August through to October, you will be able to witness the Great Migration, where literally thousands upon thousands of wildebeest and zebra gather to graze on the central Mara plains, tired and exhausted after their long and arduous trek from the Serengeti plains in neighbouring Tanzania to reach this fresh grazing land.

The last hurdle for the wildlife to cross to get to these plains is the Mara River, where many fall prey to the huge and very hungry crocodiles who lie in wait to ‘snap up’ any tired animals who are finding the dangerous river crossing just too much to handle after a journey that has been already about 900 miles.

As well as game drives, you can also enjoy a sunrise safari hot-air balloon ride – making the Masai Mara now one of the few areas in East Africa where you can still participate in this exhilarating yet gentle activity.

But it is not just about the wildlife. Another highlight of a visit here includes a visit to a Masai tribe who live in mud hut villages dotted around the outside boundaries of the reserve. Unbelievably tall, and distinctively dressed in their traditional red robes, these visits offer guests the opportunity to meet the local community. 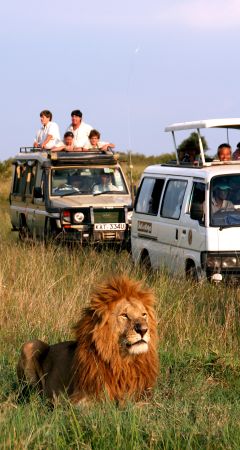 There is no wonder really, with all these factors, that the Mara is a special destination – and one that people want to come back to time and time again.

Masai Mara Itself or Private Conservancy?

For first time safari-goers to Kenya, it is important to understand the difference between staying in the Masai Mara Reserve versus staying in one of the many private conservancies which are located just outside the main reserve ‘official’ boundaries.

Staying In the Reserve Itself

The Masai Mara Reserve is managed by the local council and government, who are responsible for maintaining roads, controlling poaching, and security within the reserve.

Game drives within the reserve boundaries are restricted only to the extensive road network, and also between set hours – normally 06:30 until 18:30  – meaning no night drives are allowed at all.

The number of visitors is not restricted, and the safari experience is therefore open to everyone. Although the reserve is a 5 hour drive from Nairobi, you will get a lot of tour companies who will drive guests down from the capital city as a 'day trip' - leaving around 4 am in the morning and returning late in the evening, with the sole aim to tick off as many of the Big 5 as they can see in a few short hours.

You will therefore find that on game drives, you may certainly see other vehicles - especially during the Great Migration months and you are heading towards the Mara River to hopefully witness a famous wildebeest/crocodile crossings, you will be sharing this experience with up to as many as 50 other vehicles. 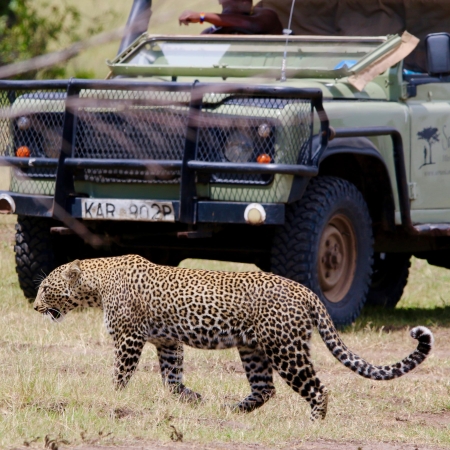 Staying in a Private Conservancy

The other (and very popular) alternative is to stay at a safari camp situated in a private conservancy just north of the main reserve, where it is possible to escape the crowds and experience the African wilderness without the presence of other tourist vehicles.

Private conservancies were pioneered back in 1997 by Porini Camps, and their owner/Managing Director Jack Grieves-Cook. The local tribal communities living alongside the Masai Mara Reserve are encouraged to set aside areas of their land as a wildlife conservancy, which benefits many different parties.

For example, local community members are employed as staff in the camps that are then able to set up in the conservancy; the tribal community earns an income from leasing their land to the conservancy and they also earn a proportion of the tourism income subsequently generated by the camps who supply a high quality safari experience; and the land creates wildlife dispersal areas outside of the Parks and reserves which increases wildlife numbers and species variety, and regenerates vegetation.

There are no physical boundaries between the Masai Mara Reserve and the conservancies so the wildlife is free to roam unhindered. 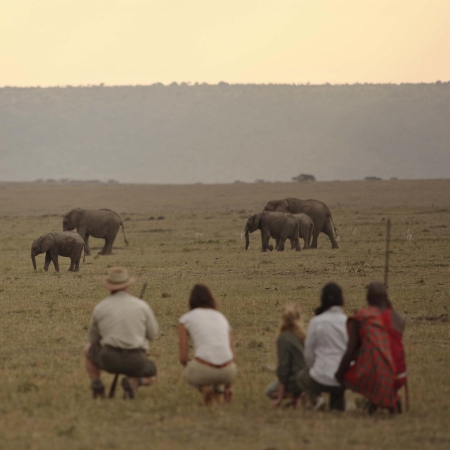 Also, because you are outside the boundaries of the national reserve, night drives from the camp after dinner in search of nocturnal animals such as ardvaark, or leopards hunting by moonlight, are a highlight of a stay in one of these camps.

Guided bush walks are also possible - you normally head out early in the morning with a guide, and walk for a few hours before stopping in the bush for a 'bush breakfast'.  You are then driven back to the camp.

The camps in the conservancies are still able to take their guests into the Masai Mara, of course, and many of the camps will include a full day game drive into the main Mara Reserve as part of a 3 night package, which is especially popular during the migration period.

With the camps being staffed by the local community, this also gives guests the unique opportunity to interact with staff members and learn about their culture.

Ashnil Mara Camp is located in the Masai Mara National Reserve and close to the Mara River, which is world-famous for being the final dangerous hurdle for the thousands of wildebeest, zebra and gazelle who undertake the 'Great Migration' every year.

Ilkeliani Camp has stylish en-suite tented rooms which have a raised position overlooking the Talek River and surrounding landscape.  Each tent has been carefully sited under its own cluster of shady indigenous trees giving guests a true feel of being out in the wilderness.

Nestled in the heart of the exclusive Masai Mara North Conservancy is Neptune Mara Rianta Luxury Tented Camp. The 20 luxury tents are built on elevated wooden platforms and have their own private viewing deck directly overlooking the Mara River.

AndBeyond Bateleur Camp comprises of 2 camps (north and south) each with 9 tents. Each tent has its own private deck overlooking the vast game-filled plains of the Masai Mara, and a personal butler ensures that every need is catered for.

The camp has 9 authentic white canvas tents in total, which are spacious and luxuriously furnished, incorporating original safari antiques. As the concession is outside the main Masai Mara Reserve, guided walks and night drives are allowed on the concession and are highly recommended.

The distinctly unique Mara Engai Wilderness Lodge is nestled amongst pristine forest on the Oloololo (Siria) Escarpment with around 120 km of unbroken views across the vast savannah of the Masai Mara. Accommodation consists of 20 large tented suites, which provide seclusion and privacy.