The Serengeti National Park is best known for its wide open plains, abundant wildlife, and of course the Great Migration that takes place every year.  Over a million wildebeest and thousands of zebra and gazelles trek hundreds of miles across the vast plains of the Serengeti in their quest to find water and richer grazing land.

But the game viewing here is not only just about this naturally occurring phenomenon.  The Serengeti also offers what many people consider to be some of the best game viewing in Africa.

Large herds of buffalo, thousands of antelope such as eland, impala, gazelles, topi and kongoni, and family groups of zebra and giraffe are closely watched by eager predators such as lion, leopard, cheetah and spotted hyena, who are always on the look out for a quick and easy meal.

Black eagles soar on the thermal currents, circling around in search of lizards and rock dassies to swoop down upon.  Secretary birds strut across the short, shimmering grasslands, and ostriches, with their ungainly gait, run around for no apparent reason.

Over 500 bird species have been recorded here, making this a bird-watchers paradise too.

The Serengeti National Park covers just over 14,750 km², and as well as being a World Heritage Site, it is also one of the largest National Parks in Tanzania.  For obvious reasons, it is also the most visited. However, despite the number of safari goers that flood here every year, because of the sheer size of the Park, you can still find yourself being on the only game viewing vehicle for miles around. 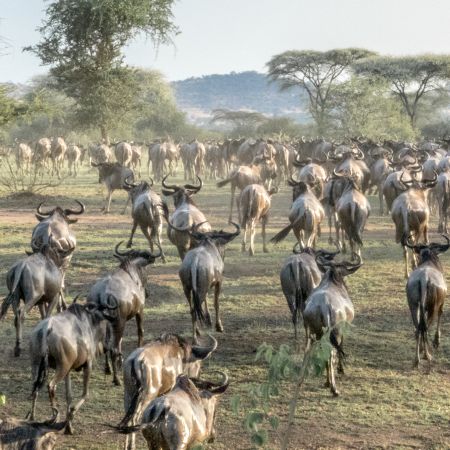 © Travel ButlersThe Park consists of not only wide open plains which most people automatically associate with the Serengeti landscape, but also hills, valleys, rocky outcrops known as 'kopjes' (pronounced 'copies') and a number of rivers - making it also a very scenic safari destination. The rivers in the Serengeti are mostly seasonal, but the Mara River in the far north and the Seronera River in the central plains contain water year-round, making these areas particularly game-rich.

The Park is divided into 5 main areas, so working south to north and in a clockwise direction:

Firstly, you have the Southern Serengeti Plains, where about 1.5 million wildebeest and 200,000 zebras congregate from December/January onwards to give birth prior to the start of their migration northwards.

You then get to the scenic south-western Moru Kopjes area, which as the name suggests consists of lots of 'kopjes' or rocky outcrops. Moru means granite in the local Maa language/dialect.

Then you have the central and easily accessible wide, open grassy plains of the central Seronera Valley, which offers good game viewing all year round due to the permanent river source of the Seronera River.

The Western Corridor is home to the trecherous Grumeti River, which the migrating herds have to cross whilst desperately trying to avoid the snapping jaws of hungry crocodiles.

And finally, you reach the extremely remote and therefore relatively unvisited northern reaches, that stretch right up to the border with Kenya and the Masai Mara. The Lamai Wedge in particular is one of the most beautiful areas in his area and covers the area north of the Mara River right up to the Kenyan border. 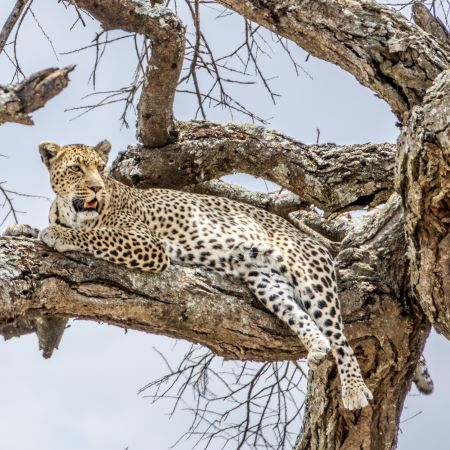 © Travel ButlersSafari goers can book a private 4x4 safari vehicle complete with your own highly experienced driver-guide, which is ideal if you want a more private safari experience, travelling in a larger group or if you are visiting more than one area, or there is also the option for a fly-in safari, which is advised if you are tight for time and the more convenient way to travel if you want to visit one of the camps in the remote northern reaches of the Serengeti.

There are a wealth of Serengeti safari lodges and tented camps to choose from, which mean whatever your budget, there should be something suitable for you. You can either decide to stay in just one place, or many people combine a stay in 2 or even 3 lodges and camps in each of the different areas of the Park. If you want to follow the migration closely, staying in a mobile tented safari camp would be recommended, as the location of the camps is only decided once the migration is in full flow.

A Serengeti safari will generally include daily game drives with your professional guide in closed-sided vehicles (many people choose to head out after an early breakfast with a picnic lunch to really maximise their time game viewing or you can choose to do morning and afternoon drives only and return to the comfort of the lodge for lunch and a brief siesta!).  No walking safaris are allowed in the Park (there are a few exceptions to this rule, however, which is where a particular lodge is situated in a private concession area).

As well as a safari in the Serengeti, you can also combine a stay here with time in some of the other destinations on the well-travelled Northern Safari Circuit, including Ngorongoro Crater and Lake Manyara, or the Tarangire National Park.

Set high on a tree-clad ridge, the Serengeti Serena Safari Lodge offer panoramic views across the Serengeti’s vast, endless grasslands. A series of traditional domed rondavels, each with a private balcony, are widely spaced throughout the grounds.

Situated in the Central Serengeti area, accommodation is in safari tents, each with en-suite facilities and an outside seating area. The campfire is ready every evening where you are served drinks, appetisers and snacks before dinner.

The Serengeti Ndutu Kati Kati Tented Camp is a seasonally mobile camp, strategically situated in the south of the Serengeti from December to the end of March to enable guests to witness the start of the phenomenal Great Wildebeest Migration.

The lodge has been designed with a modern African decorative style that creates a fresh and bright atmosphere, but is still cosy and also offers the right amount of luxury. The 25 spacious tents all look out over the Serengeti Plains.

The camp is situated near the Seronera River and a hippo pool. The area boasts an abundant variety of resident wildlife (including all the Big 5). Each luxury en-suite tent has a private viewing deck with uninterrupted panoramic views.

Ole Serai Luxury Camp Turner Springs lies right in the heart of the central Serengeti, not far from the Ngare Nanyuki River and in the path of the migrating wildebeest. The camp consists of 20 luxury guest tents that are set out and specially designed with maximum guest privacy in mind.