Tanzania's part in the Greatest Show on Earth

Tanzania is synonymous with the Great Migration, and with careful planning and a little luck, it is possible for visitors to be at the right place to witness this amazing annual wildlife event. 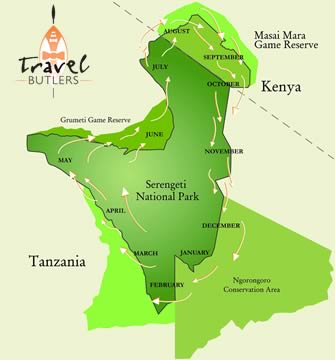 Each year, literally thousands upon thousands of wildebeest, zebra and gazelles trek across the vast Serengeti plains towards Kenya’s Masai Mara, in search of new grazing grass. It is estimated that just over 2 million animals in total make this migration from one country to another and back again - a round journey of just under 2,000 miles.

The story begins in the Ndutu region of the Ngorongoro Conservation Area and the Southern Serengeti plains from December, when the wildebeest and zebra congregate together to feed on the nutritious grassy plains. About half a million calves are born over just a short 4-6 week period during February/March. Once the calves are strong enough to begin the journey with their mothers, the herd sets off on their arduous journey northwards.

From April-May time, the Seronera Plains, in the heart of the Serengeti, come alive with the migrating herds.  As this area is also home to resident leopards, cheetah and lion, it is an exciting place to be staying!

Some of the herd continue to head directly northwards from here, but the majority will veer off towards the west, and by June, the first of the herd reaches the Grumeti River in the Western Corridor. Many lodges are based around this area, some even giving visitors the perfect opportunity to witness this somewhat blood-thirsty river crossing from the comfort of their lodge deck or private verandah. 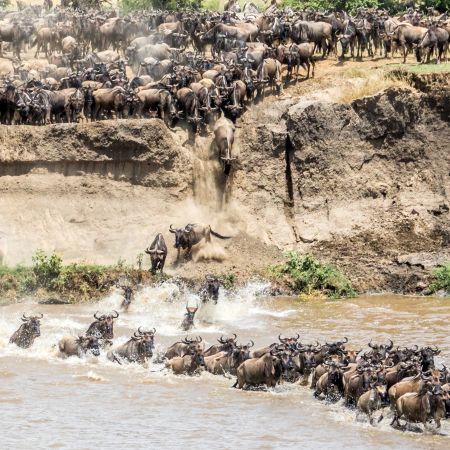 © Travel ButlersThose animals who do make it across by avoiding the snapping jaws of hungry crocodiles continue to push northwards, crossing into the neighbouring Grumeti Reserve and head up through the Ikorongo Game Reserve.

By July, the migrating wildebeest and zebra are spread across the far Northern Serengeti plains, now into the final stages of their Tanzania journey. Although they can by now almost smell the fresh green grass across the border in Kenya's Masai Mara, they are not there yet.

The Mara River flows down from the adjacent Masai Mara National Reserve and through the Northern Serengeti plains, so this is yet another obstacle that stands in the way. Characterised in places by steep sandy river banks that almost look like mini cliff edges, and home to some of the largest crocodiles ever seen, a Mara River crossing is considered to be the biggest and the most dramatic of all wildlife crossings, and has been the centre of many documentaries. There are set 'crossing points' along the entire river which every year are used by the herds, and whether you witness a Mara River crossing in the Serengeti or the Masai Mara, it is a sight that will remain in your memory for a lifetime.

For those visitors who travel in the hope of seeing a crossing in the Northern Serengeti, you will, however, be pleasantly surprised at the number of vehicles sharing the event with you - because of the remoteness of the area, it attracts significantly fewer visitors compared to the busy river crossing points in the Mara.

It goes without saying that river crossings cannot be predicted, so if this is your dream, our recommendation is to plan to spend as many nights as you can afford (both in respect of time and budget) around the river area. You can find yourself waiting in eager anticipation at the river bank opposite thousands of wildebeest who look like they are ready to 'take the plunge' - only to find an hour later they have all dispersed!  It can be frustrating to say the least, but this is nature. The herds do like to take their time when making the life or death decision to cross the river - so the numbers have to build up, they have to have the energy, and the conditions have to be right. It can sometimes take days of patient waiting while the herds coming close to the river's edge then move away again before the first brave one takes the leap that means the rest of the herd follow suit. 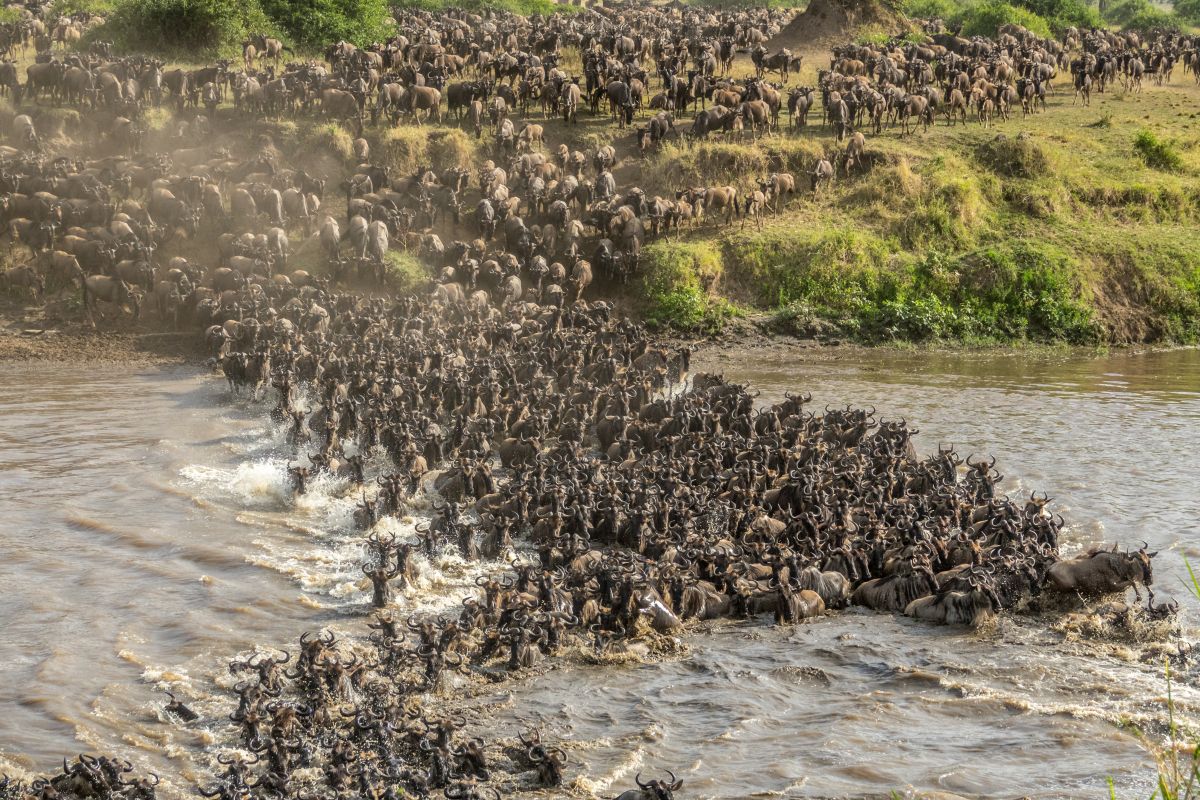 If you want to experience this extraordinary event and in particular stand a chance of seeing a river crossing, then you must be prepared to both book early (as this is not surprisingly THE most popular time for visitors), and also pay high season rates.

From late August, Tanzania says goodbye to the majority of the wildebeest and zebra as they have by now crossed into the Masai Mara, where they stay for the next few months to graze on the fresh grass they have been anticipating since the start of their long trek.

From early-mid October onwards, the herds have reappeared back into the Serengeti eco-system, and it is not uncommon to see more river crossings again in the Northern Serengeti as the herds need to cross the Mara River again in order to begin their trek back down south for the whole cycle to begin again.