Divided in two by the Kazinga Channel which connects Lake George and Lake Edward and spanning the Equator, the Park is also very scenic. As well as having the backdrop of the ice-capped Rwenzori Mountains in the distance, which form the border between Uganda and the DRC, the Park has breathtaking crater lakes, sprawling open plains and grasslands dotted with acacia trees, forests, lakes and wetlands. 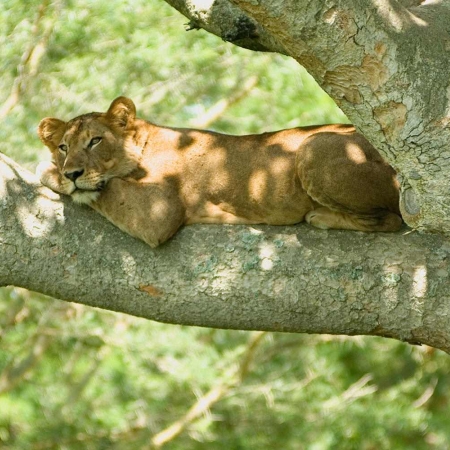 This variety of habitats attract a wealth of wildlife including elephant, lion, hippo, buffalo, leopard, giant forest hogs, warthog, chimpanzees, several other primate species such as baboons and the black and white Colobus monkey, topi antelope, Ugandan kob (a type of antelope found only in Uganda, South Sudan and the DRC), and over 600 bird species - the greatest number of bird species found in any of the East African national parks.

The Ishasha section is the southwestern part of the Park. There is good and varied game found here, but it is generally thought that the northern section has more game and therefore attracts more people, so on a safari in Ishasha you will certainly meet fewer vehicles. It is therefore ideal if you want to get away from the crowds, and many people will spend one night here - although a good proportion will just spend a few hours en-route to the northern section from Bwindi or visa versa.

Most people who do come here want to see the tree climbing lions - who have made their fame by often being seen lying along a branch in their favourite tree rather than sprawled out asleep under the tree in the shade!

The swamps in the area are also a good place to hunt for the elusive and rare shoebill - a prehistoric-looking large bird that resembles a stork but is not actually part of the stork family.

t is also possible to visit a community project near Ishasha Village. Here, the local people allow you to enjoy some time in their homesteads, as well as see some of the crops and curios they produce, and visit the local elephant trench project - which stops elephants coming into the village and raiding crops. 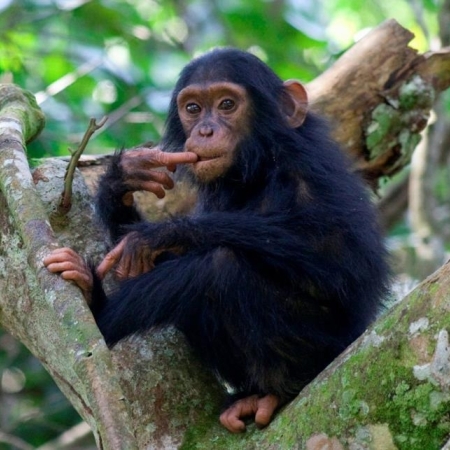 Kyambura Gorge is a huge forested crevice in the earth's crust, in the eastern part of the QENP.  This is the only area of the Park where you can track the small population of habituated chimps who live here amongst the trees.

The treks take place in the morning or the afternoon, and once you find the troop, you are allowed to spend one hour with them as they go about their daily business of foraging for food, swinging noisily through the branches, and grooming each other.

As well as chimps, you may also see other primates including baboon and vervet monkeys.

The open plains here are a major breeding for the Ugandan kob, which in turn attracts predators such as lion, hyena and even the occasional leopard.

You can also do lion tracking here, under the guidance of the Uganda Carnivore Project, which allows a limited number of visitors per day to head out with researchers and trackers to track the lions that they have radio-collared.  The aim is not just to view the lions, but also to learn more about their behaviour and help with their conservation. 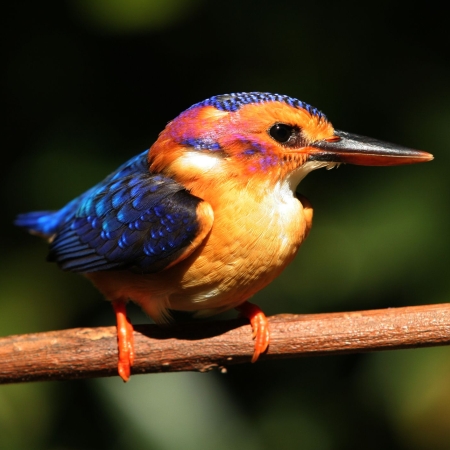 This is the main tourist area of the Queen Elizabeth National Park, and most visitors will stay for 2-3 nights. Situated in the north of the Park, the area is home to plenty of game, as well as game drives, a highlight of a stay here is taking a leisurely two hour boat cruise along the Kazinga Channel. You may encounter herds of elephant, buffalo and waterbuck, families of warthog, large groups of hippo, and huge Nile crocodiles basking on the shore.

Kazinga's shores are a haven for numerous birds, including many migratory species as they make their way south to warmer climates. Look out for the brightly coloured Pygmy kingfishers, or the yellow breasted Litte Bee-eater as you cruise along the channel.

The cruise also provides a spectacular view of the beautiful Mweya Peninsula and life in local fishing villages set along the banks.

You can also head to Lake George, another area where you may spot the shoebill in and amongst the swampy shoreline, along with the elusive sitatunga antelope if you are really lucky.

In the standard rooms, you will find a simple safari atmosphere with a level of comfort that will not disappoint. These rooms are perfectly situated to view the picturesque Lakes George and Edward.

Ishasha Wilderness Camp is situated in the Southern Ishasha sector of the Queen Elizabeth National Park on the Ntungwe River, and is an idyllic retreat for people who truly enjoy the wilderness.

The 8 stylish bandas also have a contemporary theme with the accent on local artefacts re-imagined in a new context. Each banda offers a unique view either across the savanna or the gorge from its private balcony.

Situated just 5 minutes away from the Ishasha entrance gate, Enjojo Lodge is the perfect base for visiting the Park to try to spot the famous tree climbing lions. There are 7 luxury cottages. Each cottage has its own unique charm and character, and have an en-suite bathroom with a rustic outdoor shower.