The Lower Zambezi National Park is situated just south-east of the capital of Zambia, Lusaka, and a 45 minute short flight by light aircraft from here will get you to this wonderfully scenic safari destination. 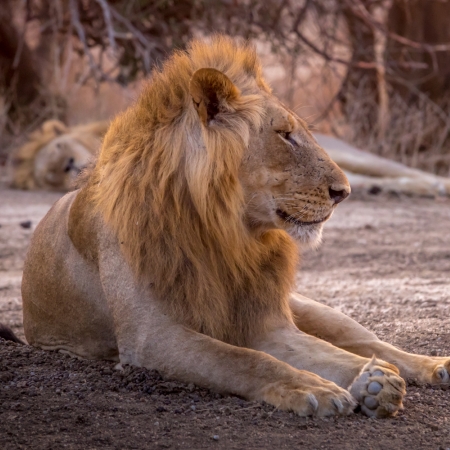 The Park is just over 4,000 square kilometres in size, and nestles between an impressive escarpment to the north and the mighty Zambezi River to the south. The escarpment acts as a natural barrier for the wildlife, which means that the game congregates on the flood plains and also favours the rich woodland which line the river banks.

In addition, the Park is immediately opposite the famous Mana Pools Reserve in Zimbabwe, meaning that the entire area either side of the river is one huge wildlife sanctuary.

During your stay here, you will have the opportunity to see a variety of wildlife including elephant, lion, wild dog, hyena, leopard, hippo, buffalo, impala, kudu, zebra and bushbuck. On night game drives, watch out for the elusive honey badger, porcupine and aardvark, as well as mongoose and genets.

Birdlife in the area is also outstanding, making this a real hotspot for ornithologists.

Because the Zambezi River is a magnet for the wildlife, all the camps here offer a host of water-based safari activities in addition to the morning and afternoon game drives in open safari vehicles, or guided bush walks. 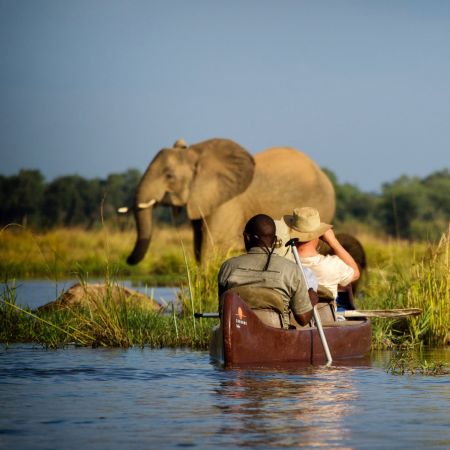 © Chongwe SafarisFor a relaxing yet still exhilarating experience, head off in a canoe with your qualified guide for a few hours, and drift silently down a remote river channel flanked by the Park on both sides. Pass herds of elephants coming down to the waters edge to drink, watch out for lions lazing on the riverbank in the sun, and gaze in awe at the crocodiles basking in the waters edge. Listen and hear nothing but a gentle splash as your guide's oar gently cuts through the water, maybe interrupted by the odd bird call.

If you want something more 'solid' between you and the water, a scenic boat cruise is the way to go. Exploring the mighty Zambezi River in this way gives you the opportunity to see huge pods of hippo and many herds of elephants on the river banks. If you are lucky, you may witness elephants swimming across the river to or from one of the river islands. A sunset cruise with a gin and tonic in one hand and binoculars or camera in the other is definately something that should be included at least once during your stay here!

Tiger fishing is also a popular activity - always on a 'catch and release' basis in accordance with Park regulations. The tiger fish is a relative of the piranha and has a spectacular set of razor sharp, large teeth, and the best months to successfully bag one of these beasts is between September to December.

There are very few lodges situated in the actual Park itself along the river, and a few more are located just outside the Park boundaries. You will therefore be forgiven for thinking that you have the entire Park to yourself. Many lodges here only operate seasonally too, normally between April/May until mid November, although there are a few that are open all year round.

Royal Zambezi Lodge is an intimate family-owned property situated on the banks of the mighty Zambezi River in Zambia, on the edge of the unique Lower Zambezi National Park and directly opposite Mana Pools.

Chongwe’s impressive variety of safari activities provides the ultimate exploration of this magnificent African paradise. By land, enjoy game drives and walking safaris, or take to the rivers and explore with boat cruises, canoeing safaris and fishing. Back in camp, the wildlife hide is great for photography.

Children aged 7 years and above are welcome.

Zambia's Lower Zambezi is renowned throughout Africa for its magnificent herds of wild elephant, exceptional predator viewing and of course the Zambezi River. Chongwe River House sleeps 8 people in 4 spacious en-suite bedrooms, making an ideal safari base for a family or a group wanting a private safari.

Children aged 7 years old and above are welcome.

Anabezi is located on the banks of the Zambezi River at the lower end of the Lower Zambezi National Park. The camp is made up of 12 spacious, secluded tented suites, raised on timber platforms to give a magnificent view of the river.

Sausage Tree Camp is the epitome of bush chic offering a civilised approach to a true bush experience with lavish attention to detail. This exclusive safari camp is set in the most stunning location on the banks of the Zambezi River in the heart of the Lower Zambezi National Park's best game viewing area.