Unfortunately, despite all of the magnificent work done by Save the Rhino and other organisations over the years, both black and white rhinos remain endangered due to poaching for their horns.

Over 90% of the world's 20,000 or so white rhino are found in South Africa, but even here the increase in poaching is a major threat to these incredible beasts.  The black rhino is under even greater threat, with less that 5,000 individuals worldwide, and the only significant populations are today found in South Africa and Namibia, making up 75% of the world's population between the 2 countries.

Photographic safaris are making a substantial contribution to the conservation of these species, and these rhino photos were all taken by our guests or members of the Travel Butlers team whilst on safari.

All pictures remain copyright of the original photographer. 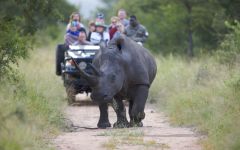