The Southern Namib, with its wide open spaces, rugged landscapes and stunning desert sunsets, is certainly one of Namibia's gems. Many people who visit the Fish River Canyon then carry straight up the main B1 towards Windhoek, missing out on the experience of the solitude and desert beauty that this area of Namibia can offer.

aus and the desert horses

The area around Aus is well-known for several things - the occasional snow on the Aus mountain range in Winter, the beautiful wild flowers that appear in Spring, wide open desert landscapes and stunning sunsets, and the legendary desert horses that roam the Namib Desert. 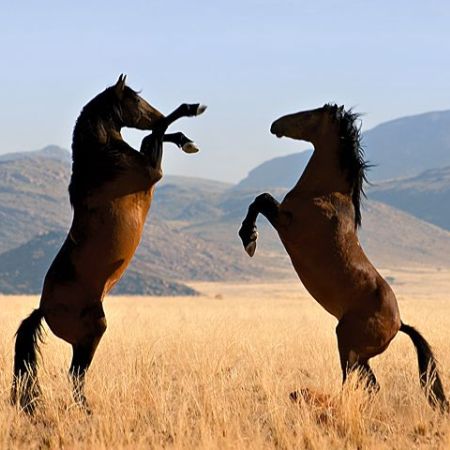 There are approximately 170 wild horses living wild in the Namib Desert, and there are many theories as to how the horses came to be here. The most likely one is that they are the descendants of the horses which were left behind when German troops from the prisoner-of-war camp fled the area in 1915.

The number fluctuates depending on the grazing conditions. After the rains, tiny green shoots sprout up through the desert floor, providing nourishment for the horses to help sustain them during the next long dry period.

The closest visitors can get to the horses, unless they take an exclusive guided tour into the desert, is at the horses' only permanent water supply from the bore hole which has been installed at Garub. Here, a small wooden hide has been erected where visitors can watch the horses when they come to drink.

In April 1908, Zacharias Lewala, a railway worker, picked up what he thought was an unusually shiny stone, and showed it to his supervisor, August Stauch.  Stauch immediately applied for a prospector's licence, and verification confirmed that the first diamond in the region had been found. The diamonds were in such supply that they could be picked off the ground by bare hands, and soon the area was flooded with men wanting to make their fortune. 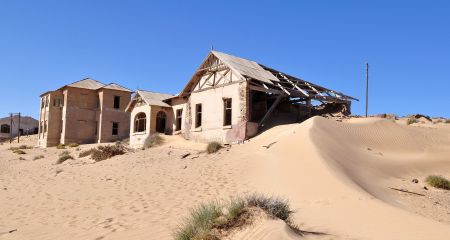 Between 1911 and 1914, 5 million carats (1,000 kilos) of diamonds had been found.  Kolmanskop became a diamond boom town. However, in 1928, a much larger diamond reserve was discovered at the mouth of the Orange River further south.  One by one, the prospectors drifted away to the new area, and soon Kolmanskop was nothing but a ghost town, and the desert began to reclaim back its land.

Today, much of the town is still standing, but the desert sand has blown in and around the deserted buildings, burying some almost completely in sand. Others are still half visible, their doors hanging open as the sand slowly engulfs more rooms. A guided tour around this  eerie and strange town is the only way to view it, and tours are given twice daily in the mornings only, in English and German simultaneously. The tour lasts for about an hour, and is a fascinating insight into the past, and very informative.

Afterwards, there is time to wander around by yourself, and take photos or explore inside many of the sand-filled houses. It is a weird feeling to have to duck to get through an old doorway into another room, or to walk across a sand dune piled up the outside of a house and step easily over the top floor window sill into what once was the main bedroom, now just a glorified sand pit. 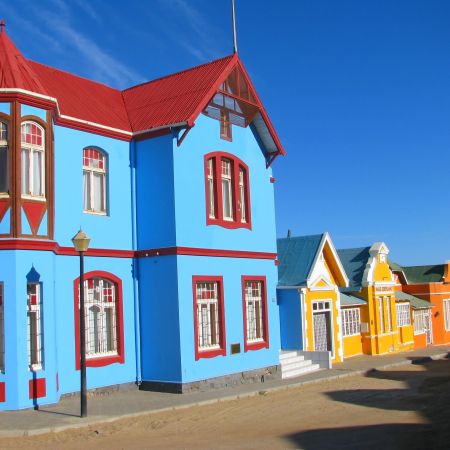 Luderitz is a small coastal town, surrounded on one side by the South Atlantic Ocean, and on the other side by the sand dunes of the Namib Desert.

The Portuguese explorer Bartolomeu Dias was the first European to set eyes on Luderitz, when he sought shelter in the bay during a storm on Christmas Day 1487. Upon his return from the Cape of Good Hope in July 1488, he erected a stone cross at what is now known as Dias Point.  Although the original cross is no longer there, a replica marble cross has been erected in its place.

This isolated town today owes its existence to the discovery of diamonds in the desert in 1908, but unlike other diamond boom towns of that era, the town has survived thanks to its other major industry - fishing.

Its character comes from the eclectic selection of colourful  Bavarian/German colonial style architecture, complete with turrets, gables and bay windows. Two of the most striking buildings (apart from the yellow brick prison on your left hand side when you first enter the town!) are the German Lutheran Church or the Felsenkirche, consecrated in 1912, and the Goerke House, built in 1909.

The drive around the Lüderitz Peninsula, just south of the town,  is a pleasant way to spend a few hours. The fairly good gravel road leads off to several small bays, where it is possible to walk along deserted stretches of beaches with just the wind, rocks, shells and seagulls for company.

Situated 2 km west of Aus on the B4, and 115 km from Luderitz, Klein-Aus Vista is the perfect base from which to explore the fascinating Southern Namib.