Home to Elsa the Lioness

The Meru National Park is situated in central Kenya, about 320 km north-east of Nairobi. It covers an area of approximately 870 km², and is one of the wildest and most beautiful Parks in Kenya - consisting of hilly landscapes, green riverine forests, savannas overflowing with tall grasses, and lush swamps, which are fed not only by the abundant annual rainfall, but also by the 3 rivers that border the Park – the Tana to the south, the Ura to the south-west, and the Rojeweru to the east. 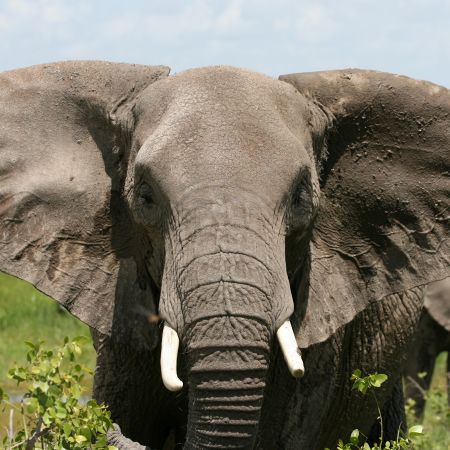 The vegetation can be quite dense in places, making game viewing exciting yet difficult at the same time, as you never know what may be hiding in the bushes!

A true wilderness, large areas of the Park do not have a road network at all, so you can only explore these areas on foot with your ranger. During guided walks, and day and night game drives in the areas of the Park where there IS a road network, visitors may be lucky to encounter large herds of elephants, giraffes and buffalos, or prides of lions and cheetah families hunting on the open savannas.

Gerenuks, zebras and ostriches can also be spotted, and the rivers are full of hippos and crocodiles. White rhino have been reintroduced into the Park, and their numbers are slowly but steadily increasing.  Birders will enjoy the opportunity to spot any of the 300+ bird species that have been recorded here.

Meru is probably most famous, however, as being where Joy Adamson and her husband George raised and released their pet lioness, Elsa – the subject of the international best-seller ‘Born Free’ and the Acadamy award-winning film of the same name starring Virginia McKenna and Bill Travers.  Following Elsa’s death in 1961, the lioness was buried in the Park, and some of Joy’s own ashes, following her own death in 1980, were scattered on Elsa’s gravesite.

Despite this claim to fame, the Park does not attract a great number of visitors, so it is ideal for safari enthusiasts who want to enjoy a quieter yet still exceptionally good wildlife experience.

As the Park straddles the Equator, it has an all-year-round warm climate, with January to March being the hottest months.

Elsa's Kopje is named after Elsa the lioness, made famous by George and Joy Adamson's biographical book and film “Born Free”. Elsa's Kopje remains one of the most elegant lodges in Africa, with 10 luxurious en-suite cottages crafted around the rocks.

Situated on 80 acres of privately owned wilderness on the border of the extraordinary Meru National Park, Rhino River Camp is a collection of canvas cottages raised on wooden decks suspended among the trees above the Kindani River.